(Sometime ago I was invited to submit an article on electronic democracy [eDemocracy] for publication in a scientific journal. However, after asking colleagues to send me anything they had that could be cited in the review, I discovered that there was almost nothing published on this topic. Most of the literature seemed to be methods of managing public participation and involvement. For example, how to manage public hearings, focus groups, and other fora where public opinion could be refined for presentation to the actually decision makers. This was not supporting what I considered to be a democratic process. I present here the draft that was started.)

The word, democracy, was not always so universally popular. The word first came into common modern political usage in the first half of the nineteenth century, primarily in western Europe. At that time, it had the tonality of terrorism today.

The idea that the “people” might actually “rule” was considered by all respectable people as a political nightmare, dreamed up by irresponsible radicals. In fact, the principal objective of respectable people was how to make sure that it was not the majority of the people who had the authority to decide. This authority had to be left in the hands of people who had interests in preserving the world as it was, or as it should be. These were people with property and wisdom, who were considered competent to make decisions.

After the revolutions of 1848, in which the “people” rose up in social and national revolutions, men of property and competence grew frightened. They responded first with repression, and then with calculated concessions. The concessions were to admit people, slowly and bit by bit, to the ballot. They thought that the ballot might satisfy the demands of the “people” and in effect co-opt them into sustaining the existing system.

Over the next 150 years, this concession (and others) worked to a considerable degree. Radicalism was muted. And after 1945, the very word, democracy, was co-opted. Everyone now claimed to be in favor of democracy, which is where we are today.

So, even when a formal democratic structure is proclaimed the law of the land, and there are free and fair elections, the actually influence of the citizen may be extremely limited. This is not just a problem in poor, backward, or underdeveloped countries, it may actually reach a pinnacle of sophistication and success in what are considered to be the most advanced democratic states (Crouch,  2004; Marquand, 2004). A leading author and activist has declared “Today, the biggest scam in the world is democracy” (Roy, 2010). This is alternatively expressed as, "If this is democracy, what is next?"

It is clear from this brief overview, that our first major task is to define and delimit what we will consider to be a democratic system.  Parry (1995) notes that the Greek direct democracy defined democracy for the more than two thousand years up to the American revolution. Therefore to begin, we will limit our discussion to the original meaning of the term. In the original Greek, the term "dēmokratia" comes from "dēmos," meaning the people, plus "kratia," meaning power or rule. Thus, in a democratic system the people rule and they obey rules that they make themselves. Of course, a definition alone doesn't provide a complete picture of the Greek democracy. The city state of Athens is typically taken as the fullest expression of that democracy. Athens had two major bodies that played a legislative role. A two to five hundred person Council prepared proposals for new laws. Citizens were limited to two yearly terms on the Council. Proposals were then discussed in the Assembly, which included all citizens who chose to attend. A typical Assembly would number five thousand, out of an eligible citizenry of about thirty thousand. About forty Assemblies would be held each year. There was also a judicial system, to which about six thousand citizens were assigned each year. A given trial would employ hundreds of these citizens. Finally, there was a large number of public offices that had to be filled. The large number of participants in official functions and the rule limiting serving repeatedly meant that a substantial fraction of citizens would be involved in administering the Athenian democracy over their life time. Parry (1995) notes that about of a third of citizens served on the Council at some point in their lives. This clearly was a participatory democracy. It also was a democracy based upon deliberation. Finally, the operation of the system was prescribed by a constitution.

Random selection of officials of all sorts was typically, since this was seen as most fair. A combination of election or appointment followed by a random selection was also common. The result would be a form of stratified random sampling, which assured a balance among different interests or "tribes." The circulation of such large numbers of citizens through the different governance bodies and other positions presented significant logistical problems. Not only did selection of hundreds of persons take place on a daily basis, but it was also necessary to ensure the right persons were performing their assigned functions. Maintaining a balance of participation was also a substantial task, since hundreds or even thousands might be involved in a deliberation.

Dibbell (2009) summarizes the technology that was used to maintain an orderly flow of citizens, proposals, and speakers. The "kleroterion," or allotment machine, was a tall rectangular stone, about the size of a person. A rectangular array of holes, about fifty rows by five or more columns served as a place to load "pinakia" or Identity Tickets. A crank driven device then dropped either a white or black ball from a funnel shaped supply. One ball would be loaded for each row of candidates. The number of white balls depended upon the number of juries or committees needed that day. If a white ball was produced on the first turn of the crank, then the first row of candidates would be assigned. A black ball would result in the rejection of that row of candidates.

In order to ensure that selected candidates appeared for duty, three types of authentication technology were employed. The Identity Tickets were used to ensure that selected candidates appeared at the proper court. The Tickets would be placed in a box and sent to the court by a tribal official. The juror would receive a bronze ball inscribed with the number of the court, in exchange for the Ticket inscribed with his name. When he arrived at the court, the ball would be exchanged for his Ticket and payment for jury duty, assuming the person was indeed the one named on the Ticket. 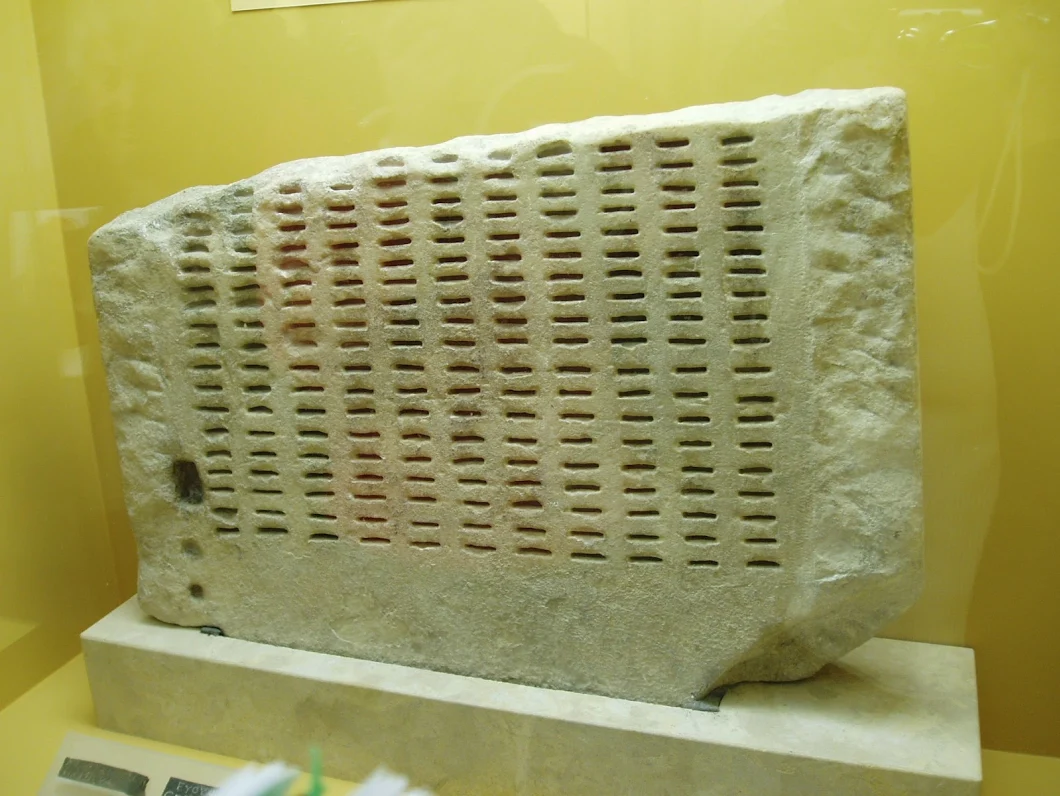 The most sophisticated authentication technology was used for officeholders. Individual officeholders were validated using pairs of interlocking fire-hardened clay tablets. The half denoting the office was taken to the task location by the officeholder and the other part remained with a tribal official. If the authority of the officeholder was questioned, the matter would be taken before the tribal official, who could confirm the identity of the officeholder. The simplest identification technology was used to ensure the attendance of citizens at an Assembly. Tagging Ropes dipped in red paint were swung by public slaves at any citizens lingering in the marketplace. Those so marked would be fined, if they didn't appear promptly at the Assembly. 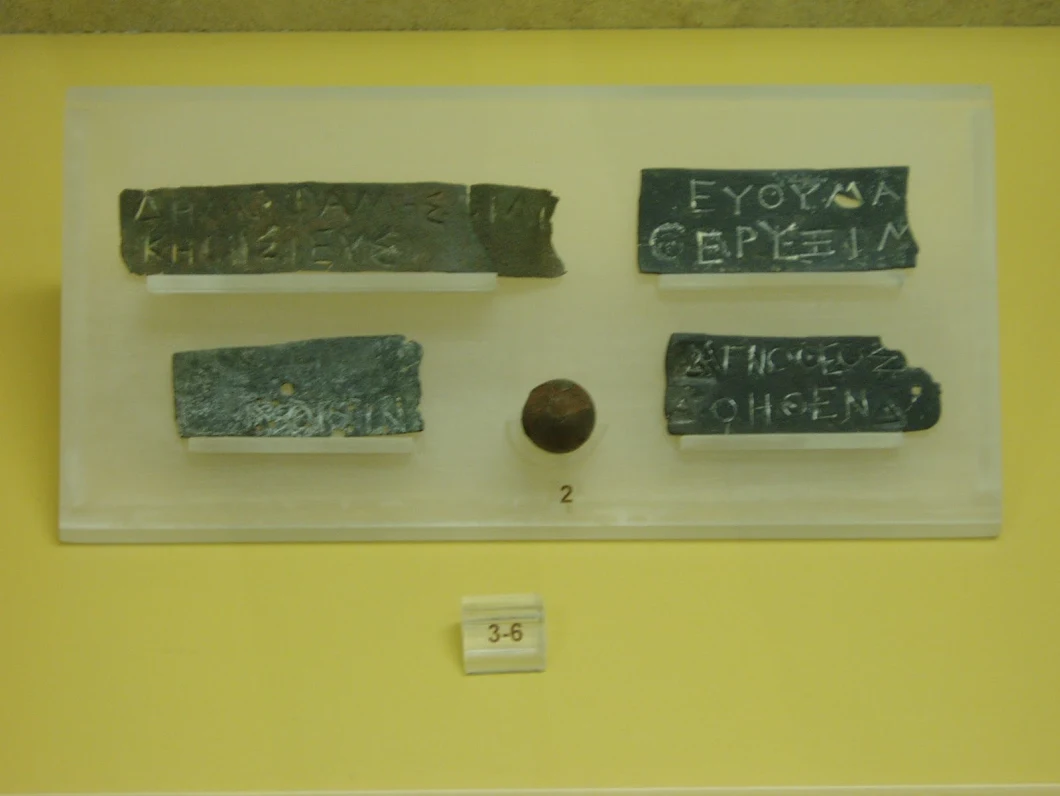 Deliberation was also supported by a technology. The "clepsydra", a water clock, was used to limit speaking time in deliberations. It consisted of a clay vessel and a bronze tube, which would empty the vessel once a plug was removed. The vessel was filled until water came out of an overflow hole in side of the vessel. A slave removed the plug from the bronze tube when a speaker began. His time expired when all of the water had run out, about six minutes later.

Three different approaches were used for decision making. In addition to voice voting and raising of hands, a technology for anonymous voting was available. Jurors cast their votes by placing bronze disks in boxes. Each juror had two disks, that were the size of a hand and had a short axel through the middle. One axel had a hole through it and the other was solid. The hollow-axelled ballot represented a vote for condemnation. The juror dropped one ballot into a closed box on his way out of the court. Another box was available for discards. The juror could conceal which ballot he was casting by placing a finger and a thumb over the axel ends. This permitted 'secret ballot' decision making. 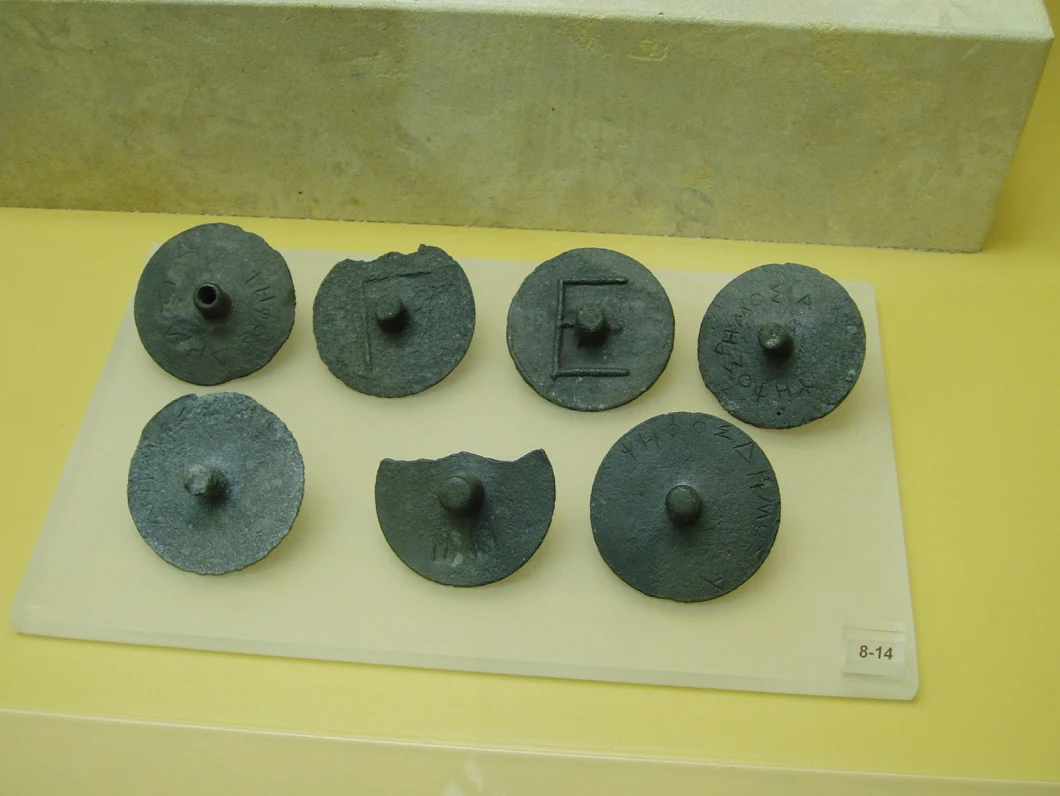 Finally, the decisions reached by citizens were recorded and published. The "stele" was slab of stone inscribed with the conclusion and placed in a well trafficked location. More ephemeral decisions and notices were written on wooden whiteboards. A centrally located bulletin board of this kind was used for official announcements. Finally, rows of four-sided sticks, which were mounted in an upright frame, could be rotated to bring different messages into view. These "axones" were used to record early laws.

The Athenian democracy made extensive use of the technologies of the day. An allocation machine using random selection replaced or supplemented appointment or voting as a means of selecting officials. Three methods of authentication were used, one for individual officeholders, one for juries, and one for ensuring attendance at the Assembly. Deliberation was supported by a timing mechanism, which assured a fair allocation of speaking opportunities and a thereby more balance in the arguments presented. Anonymous voting was implemented using disks and boxes. Three methods of recording decisions ensured the publication of decrees. While primitive by todays standards, these technologies made information available, provided decision makers with the protection of anonymity, and rewarded participants for their inputs. Separate systems for legislation and for judicial proceedings provided for creation of laws and adjudication of disputes. A written constitution specified the rules of procedure, rewards for completion of duties, and punishments for violators. Thus, widespread participation was supported by several technologies of mediation. These technologies both protected and promoted participation. 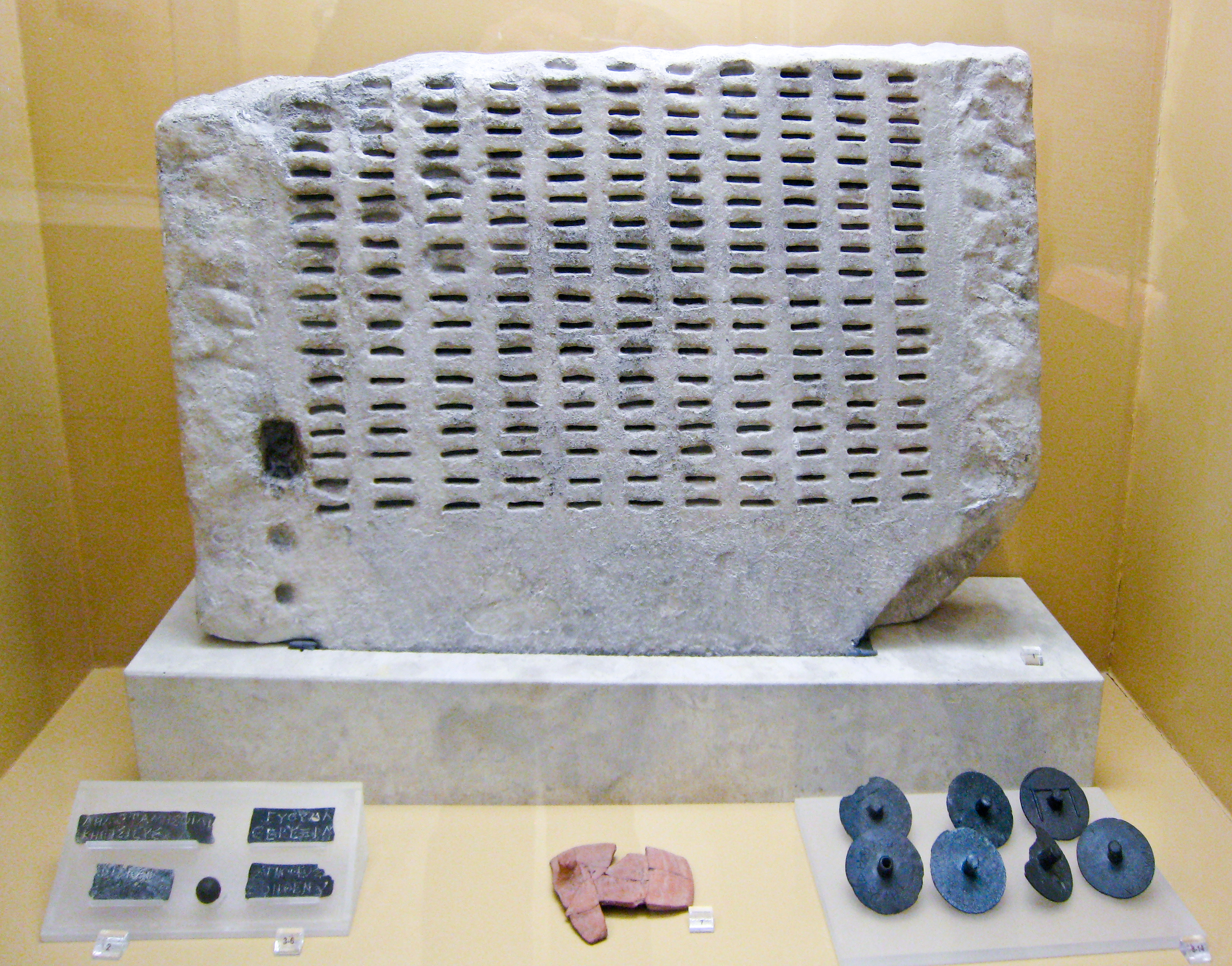