The first published O14 standards appeared in ‘Model Railway Constructor’ magazine, September 1951. The article was titled ‘A Narrow Gauge Layout’ and was by Douglas Clayton. He advocated HO standards, less 2.5mm coupled with coarse scale ‘OO’ wheelsets set to 12.5mm back to back. A subsequent article in 1953, provided details of his layout.

Very little more happened regards the development of O14 until Roy Link published a new set of standards (1993 – revised 1994) in his magazine Narrow Gauge and Industrial Railway Modelling Review. They were developed for his range of O14 kits – now produced by David Janes under the name KBscale. They are based on the proven 4mm scale EM standards (BRMSB) and are reasonably close to exact scale especially considering the variations to be found in prototype nominal 2′ gauge railways.

See the following posts for some interesting background on the standards:

Roy has kindly made the revised standards available here as a download here: 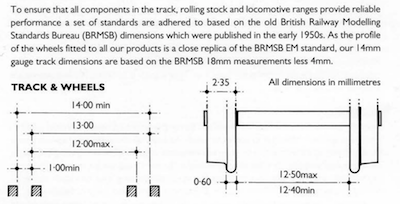