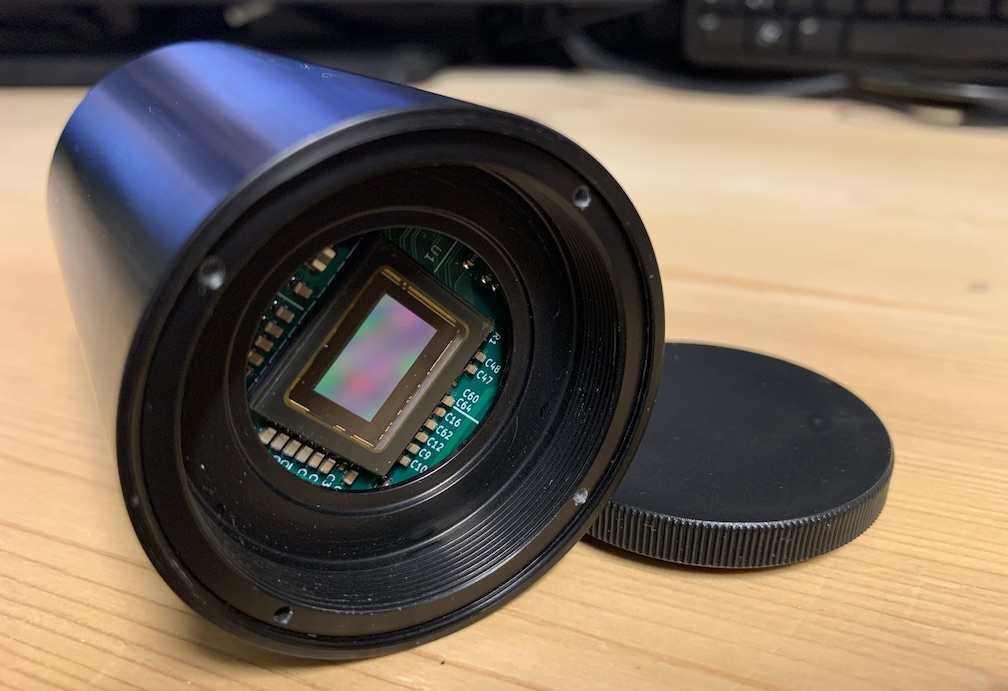 The goal of the DVTI camera project is to develop a digital video camera targeted mainly at observing star occultations, with the following attributes:

The development team consists of Stefan Meister and Andreas Schweizer.

To reach the goal of a low price, we plan to initiate a Kickstarter campain later in 2019 so that components can be manufactured and bought at reasonable prices. In addition, as we develop the camera in our spare time, the time for R&D won't add to the camera price.

24.02.2021 Today, two camera prototypes have been tested in an anechoic chamber as a preparation for the CE marking. A handful of signals between 200 and 700 MHz exceed the CE compliance limit. We're currently analyzing the source of these signals and ways to bring them below the limit.

30.01.2021 Good news! An issue with using the V3 camera under Windows 7 and USB 2 has been resolved. Firmware 0.9.62 works on our test systems in Windows 7 (USB 2) and Windows 10 (USB 2 and USB3). Schema corrections for Prototype V3 RC2 have been completed and inquiries about the production costs of the electronic circuit boards have been placed.

03.01.2021 Users of Apple macOS computers may find the "ADV Player" app useful, a small side-project of the DVTI camera control tool. Let us know if there are bugs in the app or if you'd like to see more features. Currently planned features are zooming, removing frames at the beginning or the end, editing ROIs, editing tags, saving individual frames as FITS.

28.11.2020 Test videos with 3 different sensors have been recorded recently (WATEC, IMX174 and IMX432 sensors). Stefan is analyzing the videos and will publish the results when they're ready. The functioning of the DDR2 DRAM has been verified. It's working fine, but the power consumption and thus heat generation in the camera increases significantly (also due to the much larger FPGA design footprint if the memory controller is included). We will check if it makes more sense to drop this component and may be switch to a footprint-compatible, larger FPGA with more integrated memory. An issue that caused the USB3 connection to fall back to USB2 was identified and as of firmware 0.9.60, the USB-C connector works again if plugged in in either direction.

17.11.2020 We've still not had time and weather conditions for the sensor comparison. There is however some progress on the hardware bring-up side. First tests with the 256 MBytes DDR2 buffer RAM (sequential read/write at 5 Gbps) look good. At 10Gbps write speed, the current consumption on the I/O rail is too high, this will require a minor hardware modification. Communication with the sensors at 297 MHz DDR is working, the pixel pipeline in the FPGA has been doubled for higher frame rates and the data bus between the FPGA and USB controller successfully extended from 16-bit to 32-bit to support the higher frame rates.

10.10.2020 With the new "universal" firmware 0.9.55 for V3 camera prototypes, sensors (IMX174, IMX178, IMX428/432) can be swapped without upgrading the firmware. Some first technical tests with the IMX428 and IMX432 sensors look promising, however, these sensors consume a lot of power and get very hot in the prototype. We plan to perform some sensitivity tests once the weather improves here in Switzerland and will post the results on this page.

30.09.2020 Firmware development for the V3 hardware is ongoing. So far, no blocking problems have been found. The current work in the firmware is focusing on automatically detecting and supporting different types of sensors as the PCBs for IMX428 and 432 image sensors have arrived yesterday and we're preparing a sensor board for each of these sensors. We hope that their sensitivity will be better than the sensitivity of the IMX174.

11.09.2020 Three V3 prototypes are ready. As far as the hardware is concerned, the only part which hasn't been tested yet is the buffer RAM on the board. In parallel, the IMX428 image sensor board is under development. The board can also host the IMX432 sensor which has larger 9µm pixels.

23.08.2020 First light image with a V3 camera running a minimally modified V2 firmware and the V4.10.2 control tool. The next step is to adapt the firmware so that it can benefit from the V3 features (faster frame rates, buffer memory etc.)

09.08.2020 The prototype V3 is finally generating some images. There was a bad solder joint that caused an issue which I've been searching in the firmware for a long time. V3 currently runs a modified version of the V2b firmware, which serves as a starting point for a dedicated V3 firmware. In addition, I've started working on the version 4.10 of the camera control tool. The new version will include support for the prototype V3, automated occultation report generation and various bug fixes.

08.07.2020 Another important step in the hardware bring-up of V3 has been successfully implemented today. The system and USB controller firmwares now successfully work together to first boot the USB controller and afterwards the FPGA from a combined firmware package in the shared flash memory. Due to the way the process works, we've been able to reduce the start-up time from about 10 seconds in the prototype V2 to less than 1 second. Follow this link for technical details about how this works and this link for photos about the hardware bring-up.

30.06.2020 Good news! The hardware bring-up of the V3 prototype is ongoing. A simple design loaded on the FPGA is working, and the integrated AD converter shows that the temperature and voltages are in range. In addition, a first USB3 lane is also working. The next step in the hardware bring-up is to load this test design on the SPI flash via USB controller.

14.06.2020 Hardware bring-up for a first V3 prototype has started. Power sequencing is working fine. The USB controller responds, the USB2 connection functions as expected. A next step is to verify USB3 functionality, and afterwards, the FPGA will be verified.

02.06.2020 The PCBs for prototype version 3 have arrived. Soldering and testing will start this week.

19.05.2020 PCB design for the prototype version 3 is complete and the PCB is currently in production. The design of the camera case is ongoing and should also be completed in the coming days.

05.05.2020 We're finalizing the next version (4.9) of the camera control tool which will include support for local plate solving via ansvr, improved zooming and scrolling in the preview window, a first ASCOM integration to synchronize and control the telescope and various other improvements and bug fixes. PCB design for the prototype version 3 which is our "release candidate" for the kickstarter project should also be completed in the next few days.

13.02.2020 The upcoming version 4.8 of the camera control tool will include a couple of new features: Integration with OccultWatcher so that you can forward the event data from OW into the control tool; integration with nova.astrometry.net so that you can plate-solve what you see; support for ADV files, including multi-ROI ADV files; support for FITS series; support for skipping frames during recording. These features will be extended further in upcoming releases. Stefan is currently testing the new version of the control tool and we plan to release it for beta-testing soon.

24.01.2020 We've prioritized the implementation of recording ADV files so that the position of the timestamp within the frame can be more clearly defined than with SER. An updated version of the control tool will soon be ready for testing. In addition, starting at the next release, the camera should be more tolerant to connection issues during firmware updates, i.e. a new firmware won't directly overwrite the existing firmware on the camera but be written into a separate location and "activated" if the download into the camera has completed.

11.01.2020 We've been busy the past few weeks fixing issues reported by our beta testers, especially problems with Windows 7 and USB 2. A new DVTI control tool and new firmware images contain these fixes. There are still a few open points, but we've nevertheless started designing the "release candidate" V3 version of the camera in parallel.

05.12.2019 We're working on the hardware bring-up for the IMX178 sensor board. There's a minor issue with missing pull-down resistors on power-enable lines, and the VHDL code for the power-up state needs to be improved, but no blocking issues so far...

23.11.2019 Firmware versions 0.3.20 and 0.4.20-beta are available in the files section. Check the release notes to see what has been improved. In addition, the camera control tool has also been updated. The new version statically links to MFC and should work without installing the VC++ redistributable package.

19.11.2019 IMX174 first and second light have been successful. The firmware is still not on the same level as the one for the AR0130 but it's catching up. Firmware 0.4.20 will increase the maximum frame rate from 20 to 30 fps and allow for exposure times shorter than the frame time, down to 1ms. IMX178 boards should arrive this week. In parallel, we're working on setting up the Kickstarter project. Depending on tests with the IMX178, we'll decide whether to offer the "small" camera with the AR0130 or with the IMX178.

05.10.2019 Version 4.3.6 of the DVTI Cam Control Software is available in the Files section. This version adds several new features such as automatic start of streaming, toolbar buttons, dark frame pedestal and more.

02.10.2019 Firmware development for the IMX174 has started. Simple streaming with fixed parameters is working. 3 new V2 prototypes are being built.

24.08.2019 Testing of the V2 prototype is ongoing. Aside from the integrated GPS antenna, everything is working as expected. IMX174 sensor boards are ready, the firmware update for these is currently being developed.

29.06.2019 A new firmware (0.2.15) and control tool are available on the downloads page. The new firmware adds a binary overlay in the last line of the image. The control tool is now able to parse the binary overlay and display it on the screen. It also includes the start time of each frame in SER videos and FITS files. The format of the overlay is documented on this page.

22.06.2019 Last thursday, the boards for the V2 prototype have arrived. One is already assembled and ready for first tests.

29.05.2019 Added an example to show the difference between 8-bit and 12-bit recording. Added firmware 0.2.12 and a corresponding version of the control tool on the software download page to support replacing the GPS time overlay with a black bar for dark frame recording.

18.05.2019 Software downloads are now available on this page. The re-write of the control tool is still ongoing. The control tool was initially programmed in C# / .NET and accessed the Media Foundation framework via COM interop, but we noticed frame losses at high frame rates and decided to re-implement the tool in C++ / MFC. Wish we had found this blog post earlier: https://blogs.msdn.microsoft.com/mediasdkstuff/2009/04/01/calling-the-format-sdk-directshow-media-foundation-or-the-wasapi-from-managed-code-c-vb-net/

01.03.2019 First ADV file generated from the control tool; some issues with brightness levels and an error at the end of the file.

If you have any questions or feedback for the project, feel free to send us a message (Messages button at the left side of the screen).