Removing the Rube Goldberg valve on a mk-I

Some C-30s with the M-25 engine were equipped with a gate valve (bolted to the angled wall in the engine compartment) that was plumbed into the engine coolant-circulation loop.  Engines with the 2" heat exchanger are prone to overheat at high RPM (see Service Bulletin #195) and opening the gate valve helped cool the engine better.  This valve was a CTY addition, not Universal Motors OEM on the M-25.  Hull numbers with an OEM 3" Hx did not have the gate valve.

The Rube Goldberg valve plumbing is problematic, especially with a 2" Hx, because the water heater was in line with the engine cooling loop, and would add more restriction to the coolant flow.  Opening the valve let coolant bypass the WH increased flow through the Hx and cooled the engine better.  Later C-30s (mk-I, mk-II) placed the water heater on a separate loop from the engine cooling (it was also relocated from the cockpit sail locker to behind the fuel tank under the quarter berth.)

NOTE the RGV above is NOT oriented as in real life., the
WhS and WhR are on the bottom of the assembly.

TO LEAVE YOUR WATER HEATER IN SERVICE

But you'll still not heat water quickly at the dock or on a hook -- it takes too long for the TStat to open and get hot coolant to the WH.
But you can temporarily leave it that way until you go to the next step.

To eliminate the engine heated water (you can still use the WH on dock power) just
connect the MfOut and HxIn hoses together.

Again, finding a 7/8" coupler is the problem but they can made up per above.

The BETTER WAY THAN CONNECTING the ENGINE HOSES TOGETHER

Connect the MfOut port to the Hx port (with a new hose "while you're in there."

The 7/8" MfOut to HxIn hose
(this cools the engine directly thru the Hx, no WH in the loop)

The BEST way to heat water with the engine is to put the WH on a separate loop (not inline w/ the Hx.)  The schematic below (not actual locations) shows the coolant flow with the WH set up that way.

Coolant flow on the mk-II, mk-III
(schematic, not actual locations.)

The above is OEM on the mk-II and mk-III, and to set it up that way, run the WH hoses to the front of the engine, to the Tstat bypass hose.

That hose lets coolant bypass the TStat to prevent hot spots in the block before the Tstat opens.

Moving the WH to the Q Berth eliminates airlock issues, moves weight to the centerline, and shortens the WH hose and AC power runs. So if you put a new WH there (as Ron W did) it's best to run the hoses on the starboard side.
Moving the WH is not a hard job, but not a simple plug and play, if that makes sense.
Ron has good info on his switch (also an mk-I). 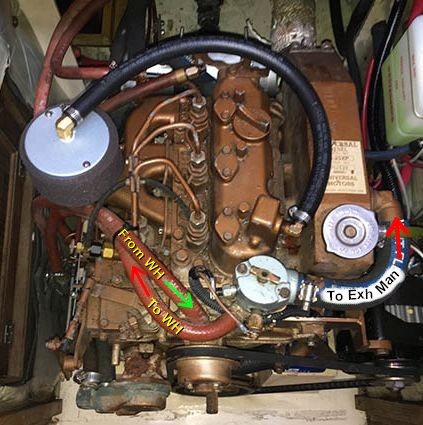 Hoses run to starboard for a WH under the Q Berth

Mine is in the sail locker so I ran hoses to port, which was neater/cleaner than above:

Hoses run to port for a WH in the sail locker

Hoses can be run either way (just need to secure them away from the prop shaft when they cross over behind the engine.)

The angles of the two 3/8" hose nipples are ok to run hoses to stbd but awkward to swing them to port -- so I replaced them with brass street ells.
A 90 on the pump and (I think) a 90 and a 45 on the TStat housing -- they oriented the hoses perfectly.

Many cats / many ways to skin 'em

(ping me if you have questions)