A DRAFT - CAUTION using this

See way below for Engine Harness 101, a primer on the C-30 engine harness and what it "does" and how.

"S" terminal = 1/4" quick-disconnect terminal on the starter solenoid for the "S" wire.

"Heavy cable" = sized for your individual situation (alternator charging amps, charging and battery set up, energy budget; how you use the boat, future upgrades planned, etc.)

Fuse the (10 awg red) power supply wire from the solenoid "B" post to the cockpit panel, within 7-inches of the "B" post.

Use an FTZ-brand M8 starter lug, (not ring terminal) and a 10 ga, tinned wire, ATC weathertight fuse holder, butt-crimped to the harness power wire with heavy (mil-spec) AHS tubing on the ends.

Start w/ a 30 amp fuse - theoretically the glow plugs are 6amp each but they have run as high as 10a.  You don't want to fuse at the capacity of the 10 awg because there are lighter wires beyond that point and so you need to keep the fuse as low as possible.  You cannot size the fuse for the lightest wire (typically 16 ga on older harnesses) because the glow plugs will blow the fuse.  Unfortunately, it's not a perfect solution, but any fusing on the panel feed is better than no fusing at all.  To fuse this situation correctly you would need to put a second lower amperage fuse at the panel to protect the lighter gauge wires.

Eliminate the gummy bear plugs on the engine harness (engine end and behind the cockpit panel (butt crimping the ends.)  Extend the harness if necessary.  (also see *** below.)

#3 For better starting and/or charging and/or safety:

If you have an ammeter on the cockpit panel, do the voltmeter modification.

Move the battery negative cable from the bell housing to a starter bolt (both are M8 bolts.)

Replace the harness "S" wire with a 10 AWG wire (if yours is lighter than 10 gauge) to minimize voltage loss to the solenoid switch.  Eliminate the barrel fuse holder at the solenoid end or substitute an ATC fuse holder (use a 10 AWG holder w/ tinned wire, and a weather tight cap.)

Replace your Alt 10 awg charge wire with a heavy cable (min. 8 awg) from the Alt out charge post to the solenoid "B" post.

Fix the quick-disconnect terminal on the starter solenoid (for the harness "S" wire.)

THEN solder the FM QD onto the solenoid tab.  Crimping the terminal first prevents solder from wicking up and affecting the S wire.

Cover with mil spec AHS tubing (form a wire strain/bend relief so it doesn’t fail at the terminal.)

On the end of your pigtail you have 3 options:

A.  Butt crimp an ATC fuse holder (w/ 10 awg, tinned wire and a weather cap, 20a fuse) between your pigtail and harness "S" wire.

*** The OEM fuse on the "S" wire is no longer needed if you fuse the harness red wire feed to the panel (Mod #1,) but it doesn’t hurt and it's a convenient location to troubleshoot voltage if you have a starting problem.

*** This QD location can be used to troubleshoot or plug in a remote starter switch to crank the engine instead of at the cockpit panel.

For the OEM harness:

The harness has these bi-directional functions [Insert a flow diagram to illustrate this]:

To deliver TO THE PANEL:

1) "Full" battery voltage/current from the positive battery post, via the battery selector switch, battery cables, and the starter solenoid "B" post, to the cockpit panel (red, 10 awg HW [harness wire] #5.)

2) A (solid, clean, interrupted) alternating current pulse signal from the alternator to the tachometer.
This signal DOES NOT go thru the gummy bear plugs for obvious reasons (HW #10, color varies - orange, gray, brown.)

At the cockpit panel, power is DISTRIBUTED TO the:

3) Blower, when the panel switch is on.

4) Gauges, tach, alarms, and gauge lamps, when the key switch is on.

IN THE OPPOSITE DIRECTION (from the panel), the harness provides:

Current to the glow plugs, when you operate the preheat switch.
If you have the glow plug solenoid/relay modification, it delivers voltage/current to that relay or solenoid that was added in the engine compartment.

The ground path to the negative battery post, via the grounded engine block and neg battery cable, to operate the blower, gauges, gauge lamps, and alarms.  That's all -- it has nothing to do with starting, your alternator, glow plugs, etc.

8 ) The path from the panel alarm to the low-oil-pressure switch (HW #7, light blue) and coolant high-temperature switch (HW #9, tan if you have one.)
These are "normally-open" switches that activate those alarms when the switches close (oil pressure goes low or temp goes high) to complete the alarm circuit negative path all the way back to the neg battery post via the grounded engine block and negative battery cable.

9) (via brown HW #8.) The path from the panel gauges to the coolant temperature gauge sender (HW #8, brown and fuel tank level sender (black, not on the engine harness schematic and it doesn't go thru the gummy bear plugs.)

On a tangent here, NOTE the misnomer.  This called a temperature "sender" but it sends no signal or anything else TO the panel gauge – it RECEIVES current BACK FROM the gauge.  The "sender" is a variable resistor that "throttles" the amount of current that flows to the neg battery post (via the grounded engine block and negative battery cable.)

So, a "sender" (e.g., temp sender) is typically a varying resistor and a "switch" (e.g., high-temp switch) is simply on or off.

10) (via purple HW #6.) Voltage/(low) current BACK TO the alternator to excite the alternator field so it begins to produce a charging current to the battery.

11) (via HW #9, usually red, sometimes black) Voltage/(low) current BACK TO the fuel lift pump.  This DOES NOT go thru the gummy bear plugs.

We all should agree that the gummy bear plugs are a problem (the hard white plug on the engine side is OEM Universal and is only marginally better than the mating gummy bear plug.)
Universal supplied M-25 and XP/XPA engines with that white, 8-position, "trailer/RV" plug on its engine harness installed on the Kubota engines.  But if they're so bad why are they there? (Westerbeke/Universal still installs similar plugs on new engines.)

Since the engines came with a plug, CTY had to decide whether to:

a) Pay Universal for it's mating harness.  NOT ($$)
(Universal's harness didn't exactly match the configuration of CTY's/Seaward's panels/instrumentation.)

b) Buy both the Universal harness AND Universal's cockpit panel.  NOT ($$$$)

c) Cut off Universal's plug, and hard wire the harness extension directly to the engine pigtails
(this might have added about 30 minutes labor per install and reduced material cost (no special harness with fabricated gummy bear plugs would be necessary.)

d) Remove Universal's wiring and fabricate/connect it's own harness to the engine (very time consuming, $$$)

e) (unfortunately, what CTY did) Fabricate a harness with a plug to mate to Universal's plug.

With a softer, amber gummy bear plug molded onto the harness wires.  Additionally, instead of hard wiring the cockpit panel CTY unfortunately put another hidden gummy bear plug behind the panel.  But if CTY didn't do this, techs would have had to connect the harness to the back of the panel, gauges, etc. (chance for errors) that came from Seaward -- this way the techs just plugged in the panels and screwed them home.

These two sets of plugs were obviously installed without realizing the initial downside of having plugs, or the potential implications for years to come thru the line of who knows how many owners.  It's a prime example of needing to, when it comes to marine installations, totally over-bullet proof products/materials, instead of doing only what is adequate for ideal "factory floor" conditions.

When I was young/dumb (before these great forums) I thought, "What the hell - clean up those plugs, squeeze the connectors tight to make good contact, tape them up to keep out moisture/corrosion -- and I'm good to go."  That was 1994, 10 years on the OEM harness.  Fast forward to 2006 -- two decades – and here's the engine gummy bear plug after unwrapping the tape during a wiring upgrade. 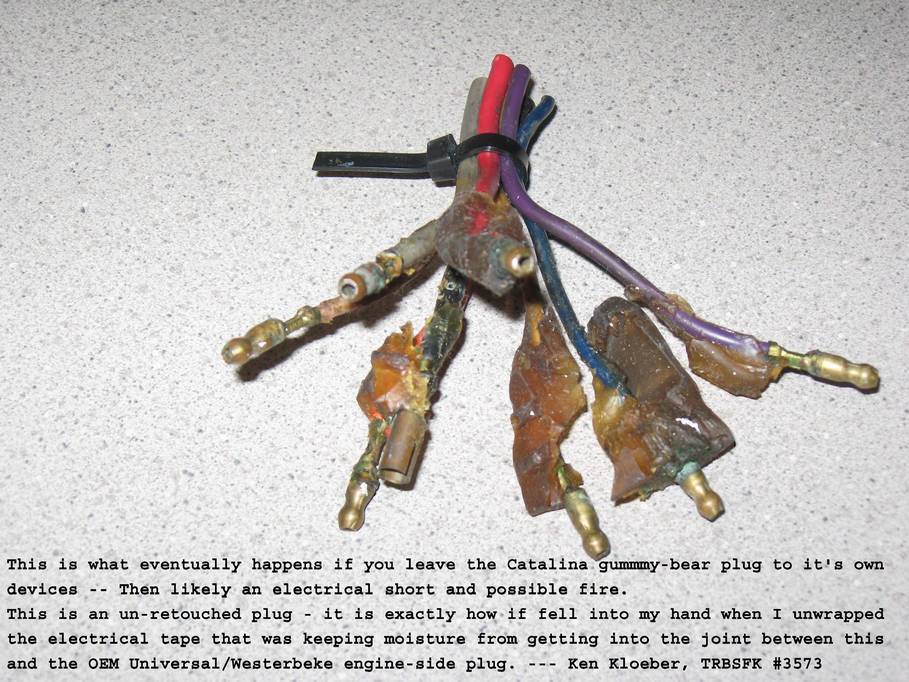 So, engine heat destroys the plugs, but that's not the whole story.  There shouldn't be high current going thru that type of bullet connector TO the cockpit panel and then BACK to the starter solenoid, glow plugs, and BOTH ways ESPECIALLY for the alternator charging circuit (which could theoretically be up to 50 amps.  Couple all that with potential corrosion on the plugs, and you have a real problem with (at best) poor or no starting, incomplete battery charging, gauge problems -- and at worst, plugs overheating, melting, and a fire hazard because there was no over-current protection installed on the original harness.

Thankfully I had tape-wrapped my plug, or I surely would have had a short and maybe a fire in the harness at some time.
For those who don't care to ELIMINATE the gummy bear plugs - Your boat, Your choice, but unfortunately, they could take out your dock neighbors' boats along with yours.

For the wiring harness itself - there were different versions but the basic issues are:

1. No overcurrent protection on the power feed to the panel.  Per ABYC there must be a fuse within 7" of the solenoid "B" post.

2. The barrel fuse holder on the S wire (near the "S" terminal on the starter solenoid) is useless, problematic (corrosion), and should be REMOVED -- may be replaced with a better fuse holder.

What does it protect?  In case the quick-connect terminal falls off the solenoid (that terminal is just plain stupid, and should be a threaded post not a slide on that can loosen and corrode.)  But remember that starter solenoid was installed for a farmer who's on terra firma and accustomed to repairing his equipment -- not to be in an engine that's in one of the worst possible environments (high heat, corrosion, vibration, plus out of sight/mind, impossible to see/access to service, etc.)

3. The starter solenoid should be one with a threaded post "S" terminal, not a quick connect (I have replacements or you can fix your own connection there.)

5. Older harnesses had a lighter gauge "S" wire (mine is 16 AWG.)  That's stupid for a critical circuit that needs full voltage/current to energize the critical starter solenoid.  I haven't measured it, but I suspect the solenoid's pull-in amps may be too high for 16 AWG, and for consistent starts, it's certainly critical to maintaining MINIMAL voltage loss in that circuit.

6. Universal put the harness negative wire on an exhaust manifold stud.  Stupid - where is constant expansion/contraction and corrosion more prevalent than at that location?

7. The connections to the engine components were non-marine-grade, non-heat shrink adhesive terminals.  A recipe for corrosion and failure.

8. The pigtail wire itself on the engine side was non-tinned copper.  That would have been acceptable if Universal used adhesive-heat-shrink terminals that seal the wire ends, but it did not.  A recipe for corrosion and failure.

9. The terminals that Seaward used at the panel (switches, alarms, gauges, etc) were non-heat shrink adhesive Stak-on type terminals.  A recipe for corrosion and failure.

10. The power lead to the panel was 10 AWG - good for 50 amps or so.  But the voltage loss is considerable if you're running the blower, glow plugs, and trying to crank the starter.  Say it's 25 amps total - that can put you back at the starter solenoid with a little over 11 volts on a good day.  The situation is even worse if you have a 16 awg "S" wire between the start switch and the solenoid.

11. Not part of the harness per se, but the battery ground cable is connected to the bell housing and should be on a starter bolt.