Why is this important

The uBitx has plenty of power at 80m, but a decreasing amount for every band you go up with barely 2W at 10m.

Why does it happen?

The devices used are incapable of the needed gain at higher frequencies with especially poor performance at the 0.5-1W level required by the driver stage.  The IRF510 has been widely blamed for this, however measurements show the driver putting out 400-500mW at 80m but barely making 60-70mW at 10m.

The IRF510 is making the best of nothing.  A better device is still going to get near nothing.

Optimal form of the amp

Ignoring the IRF510's and paying attention to the weak driver and stages before is needed, because the latter do not work well at all.

Since we have three stages and need 47dB of gain, that means the average gain is 16dB (round number is 48).  For that you need a device with an fT of not less than 1200MHz (certainly not 3904's with an fT of 300MHz).  The driver stage needs to do 1W for comfort.  A pair of decent parts like 2N3866 or 2N5109 (and others) can do that easily -- that's not four of them, but two.  However gain at high power is harder so at best we can get 13dB from them, thus the prior two stages need to produce about 35dB.  Best again is a single 2N5109 for the pre-driver and since we get more gain at lower power let's say 15dB.  That leaves the Q90 stage needed to produce a few milliwatts and 20dB of gain.  A 2N5179, BFR106, MAR6 and others easily can do that.  In addition all the interstage transformers need to be redone and also the output feed as that transformer is pretty poor.  The board layout complicates matters due to being much too tight. 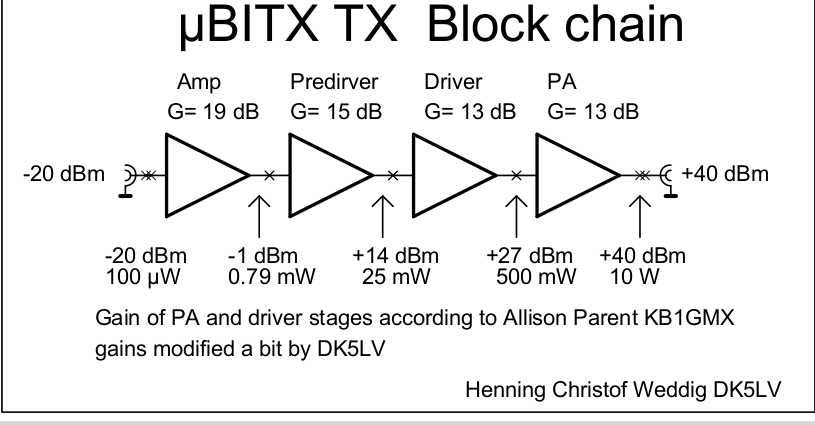 Thanks for the annotated schematic! 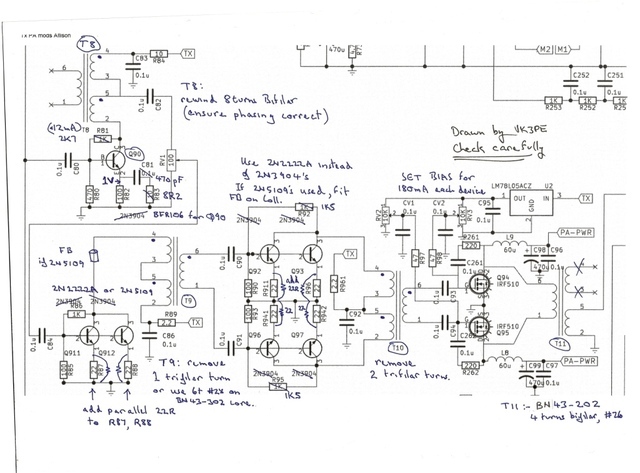 First there is no 1 pill solution as the IMD of th base amp is also very poor.

Do so at your own risk!  Be aware:  in the 20 to 30MHz range there are spurs in the SSB TX and none of these amp fixes improves that.  No fixes published for that as  Sept/15/2018.  If the instructions are too vague for you, likely you will be in over your head.  Wait for a someday maybe kit.

This is a list of things that provides improvement.  Getting this amp to better still is hard due to space and other constraints with layout.  If you think the full bore is radical, I have built one that does 3-30MHz with the same power out and less than 1W variation at 10W.  However, it cannot be done without a separate board due to space, and isolation keeping the input far from the output in a straight line.

Also do not email me with "I don't have 2N2222A (TO18) will xyzzz work?" as the answer should you get one is "tried them, they were poor" or "try it and let us know".  Same for ferrite, transformers, and so on.

If it doesn't, I'm not accepting complaints.

□  Remove T8, remove wire and rewind with 8 turns #28 bifilar.  Re-install paying attention to wiring -- ignore pins 1 and 6 as they are not used.

□  Replace both 2N3904's in the pre-driver stage with 2N2222A or better.  Hint:  I mounted them from the underside with very short leads as it makes the top less crowded.  If a 2N5109 is used, add a ferrite bead on the collector lead.  I used an unknown 43 material type as I had a few handy, they are 4mm long, and the hole was large enough to pass a transistor lead.

□  R87 and R88 emitter resistors for the pre-driver are reduced to 11ohms (for ease, just add parallel 22ohm SMD resistors on top of the current ones).

□  R86 is replaced with a 1.5kohm SMT in series with 2.7uM SMT choke (resets the bias and adds peaking).

□  Remove T9 and take one turn trifilar off of the 10 existing turns.  Re-install paying attention to lead placement and proper lead preparation/tinning.  If available, 6 turns #28 trifilar on a BN43-302 binocular core is a further improvement.

□  Replace all 2N3904 transistors in the driver with 2N2222A or better.  Hint:  I mounted them from the underside with very short leads as it makes the top less crowded.  If 2N5109's are used, add a ferrite bead on each collector lead.

Ferrite heating here is likely due to two possible causes:  an inefficient transformer due to how it is wound, and/or not enough ferrite material for the output level (more than 12W), or wrong material.

Despite claims, the RD16HHF is NOT a panacea and does not materially help results on 10m.  At $10 each it's your fun.  I tried them, and have used them elsewhere with good result, but not that much better.